The Norton Museum of Art was founded in 1941 by Ralph Hubbard Norton (1875–1953) and his wife, Elizabeth Calhoun Norton (1881–1947). For many years, Ralph and Elizabeth Norton were actively interested in fine arts and developed a sizable collection of paintings and sculpture.

An industrialist who headed the Acme Steel Company in Chicago, Mr. Norton retired in 1939 to make his permanent home in West Palm Beach, Florida. Upon moving South, the Nortons decided to share their collection with the public. In 1940, the Norton Gallery and School of Art was built on property located between South Olive Avenue and South Dixie Highway in West Palm Beach. Mr. Norton commissioned Marion Syms Wyeth, of the distinguished firm of Wyeth, King & Johnson, to design a building to house the collection. The late Art Deco/Neo-Classic building opened its doors to the public on February 8, 1941.

The Norton Museum\’s permanent collection consists of over 5,000 works concentrated in European, American, Chinese, Contemporary art, and Photography. In 1993, due to the tremendous growth in both its collections and the demand for its programs, the Norton Museum of Art undertook the challenge of providing the necessary space to fulfill its potential as a visual art Museum of the highest caliber.

The Museum conducted a fundraising campaign to fund an expansion and renovation, which more than doubled the size of the existing Museum. The Museum selected Centerbrook Architects and Planners to design the project, which was completed in January 1997.

In its latest expansion the Norton Museum\’s new Gail and Melvin Nessel Wing opened to the public on March 8, 2003, highlighting the completion of a two-year project to visitor amenities. The \”art first\” expansion increased the Norton\’s gallery space by seventy-five percent, allowing more opportunities for the Museum\’s renowned collections of American, Chinese, Contemporary, European art, and Photography to be continually on view to the public on a rotating schedule, including works never before on display in the Museum. Named for Museum benefactors Gail and Melvin Nessel, the Nessel Wing includes fourteen new galleries, an elegant enclosed courtyard that accommodates a variety of educational and social events, and a glass ceiling installation commissioned from Dale Chihuly.

The 45,000-square-foot project features a cantilevered spiral staircase and dramatic three-story atrium with architectural motifs that express the artistic statements found in the permanent collections. The new wing, designed by Chad Floyd, FAIA, of Centerbrook Architects, Connecticut, increases the size of the Norton Museum to 122,500 square feet, providing more space in both new and existing galleries to display the Museum\’s permanent collection. Interactive educational kiosks are integrated throughout. The new wing features rotating selections from the Museum\’s permanent collections. 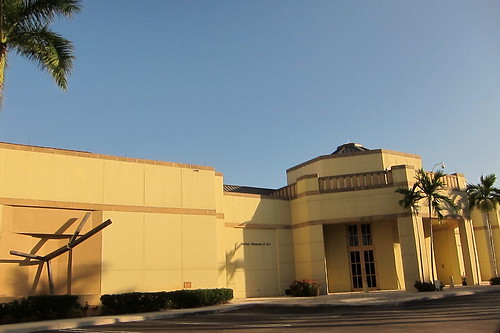 In the Wake of the Hunters Pelvis with the Moon – New Mexico Gardens of the Villa Moreno, Bordighera Study for Head of Saint John the Evangelist Christ in the Garden of Olives Interior of the Salon of the Archduchess Isabella of Austria